Karnataka SSLC Topper List 2022 District Wise with marks PDF Download @ sslc.karnataka.gov.in: Karnataka Secondary Education Examination Board (KSEEB) has published the SSLC topper list with district-wise percentages after the announcement of the result. Amit Madar from Vijayapura District, Bhumika from Tumkur, Praveen Neeralagi from Haveri, Sahana Mahantesh Rayar from Belagavi, Aishwarya Laxman Kanase from Vijayapura, Akruthi SS from Chikkamagaluru, and other 139 students have topped SSLC Exams with full marks. A total of 145 students have scored 100 percent marks in their Secondary School Leaving Certificate (SSLC) 2022 Examinations. Viewers can check and download the PDF of the student list of Toppers with marks through the official website – www.sslc.karnataka.gov.in. Get SSLC Result 2022 Topper List, Rank List PDF, Grade wise result using the direct link provided on this page below. 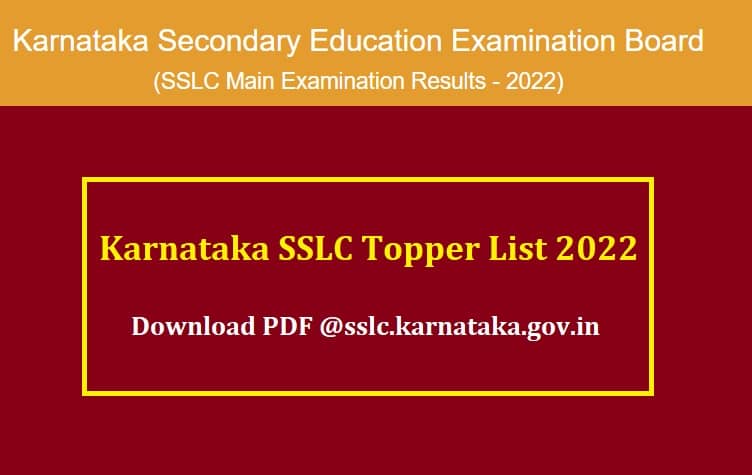 The Karnataka Board Examination Board, KSEEB has released the SSLC Result 2022 at www.karresults.nic.in. According to the reports, Minister for primary and secondary education, BC Nagesh said that the results were the highest in the last 10 years as the exam paper was student-friendly this year. “Instead of 20% of tough questions, we had only 10% tough questions this year because students had faced unprecedented situations in the past two years,” he added. The overall pass percentage of SSLC Result is 85.63%. And after the results, the SSLC Toppers Name with marks have been shared by Karnataka Board. You can also check student list, district wise toppers with percentage at the SSLC Board website – https://sslc.karnataka.gov.in.

District wise merit list for Karnataka SSLC toppers 2022 has been provided by State Education Minister, Karnataka during the press conference. The pass percentage for the Karnataka SSLC result has dropped compared with the 2021 results. Nearly 8,73,846 students had enrolled for SSLC Exams 2022 out of which 4,52,732 were boys and 4,21,110 were girls. A total of 7, 30, 881 students have passed the 10th examinations 2022. The exams for SSLC 2022 CCE regular, fresh students were conducted from 28 March to 11 April. Now, candidates, who appeared for Karnataka 10th Class Exams 2022 can download the district-wise rank list since the name-wise results are also declared. As per qualitative grade updates, 32 districts with a total of 10,920 schools have been awarded A (75-100%) grades while B (60-75%) grades have been received by only two districts.

According to this year’s result statistics, 1,18,875 students who scored ‘A+’ grades have percentages in the 90 — 100 range. The girl’s pass percentage has been recorded at 90.29% and the boy’s pass percentage has been recorded at 81.3%. The girl’s pass percentage is higher than boys in KSEEB SSLC result 2022. Furthermore, as per result date, As per the result data, 145 students have got 100% marks, and 309 students have been categorized in rank 2, with 624 marks out of the total 625 marks.  And 472 students have got the third position with 623 marks. The Karnataka SSLC marks card and the consolidated mark sheet is available at https://karresults.nic.in. Soon, the board will announce the dates for revaluation/supplementary exams. 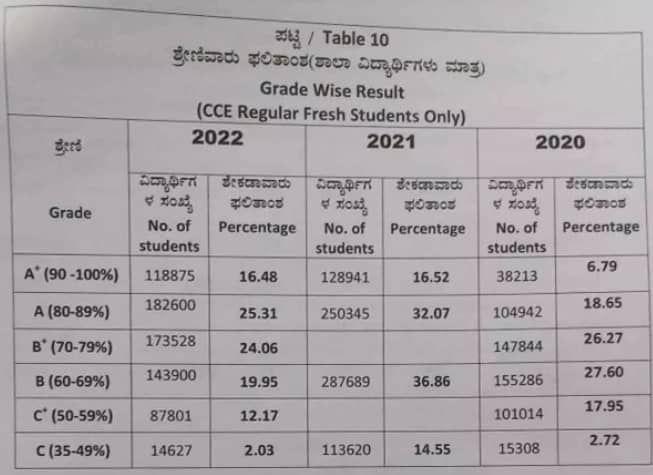